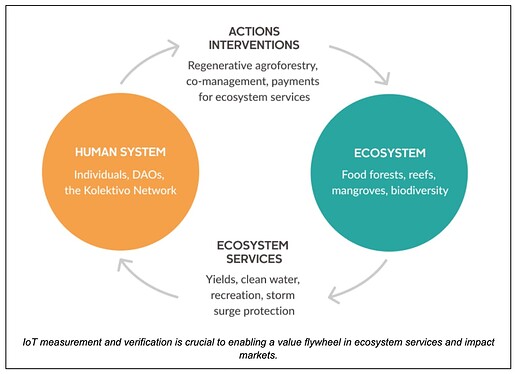 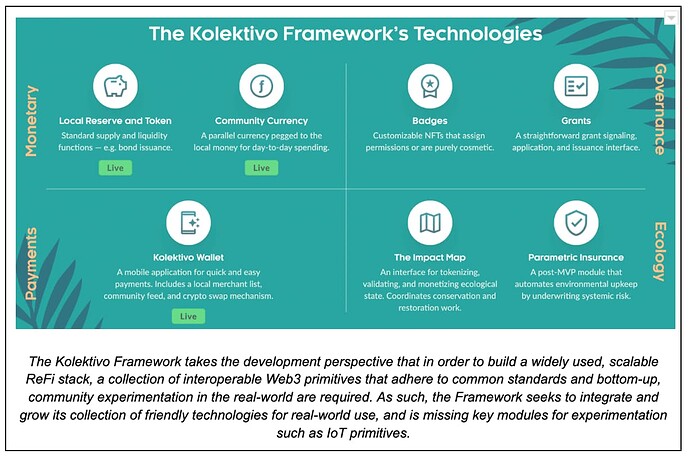 Screen Shot 2022-12-23 at 14.30.211228×818 102 KB
The Kolektivo Framework is a suite of institutional Web3 tools designed for local communities to launch, govern and maintain their own regenerative economies. Over the past few years, a coalition of Web3 experts have joined forces to conceptualize Regenerative Finance (ReFi) tools such as:

→ Certain framework tools, such as Badger (description below) or the Kolektivo Wallet, are already live.

For increased scalability of Kolektivo’s regenerative framework, we need high-quality, trustless and verifiable data to serve as the base layer of a bottom-up environmental monitoring infrastructure. As a Proof-of-Concept (PoC), Kolektivo will integrate W3bstream’s Pebble trackers to track environmental data within our Curaçaoan food forests. Upon successful completion, we further propose a progressive grant for better governance and increased scalability of W3bstream, by integrating Kolektivo’s governance module and geographic token standard — Badger and the GeoNFT. This will serve the W3bstream community through delegated community governance and improved data management, as well as interoperability with a wider ecosystem of ReFi-related development. Coincidentally, Kolektivo benefits through its hands-on IoT development, building modules to be used in its constituent pilot communities. In the long-term we envision a durable collaboration between W3bstream and Kolektivo, manifesting a balanced, production-capable assemblage of existing primitives.

→ Based upon ongoing conversations with IoTex ecosystem and product teams, we will deliver PoC and hold back on bringing in our governance modules for community governance of IoT devices until Gnosis Safe is deployed on IoTeX. The timeline therefore, after the first milestone, is dependent on the progress of this development.

A group of food forest stewards joins Kolektivo. To capture and report ecological data such as humidity and temperature, they acquire five Pebble trackers, place them within their food forest, and set up a W3bstream node. Currently, to facilitate data collection, Kolektivo polls data from the weather stations every 15 minutes and sends the data to a centralized MongoDB database that receives all data streams and will expose the data for querying and analysis. The summary data will be uploaded on a regular basis to decentralized storage by the Ecological Data Delegate. We will extend the MongoDB weather data ingestion to support the pebble trackers by integrating with W3bstream. The pebble tracker data will be forwarded to MongoDB, which allows indexing by time series and geospatial location.

→ This will serve as PoC showcasing the pertinence of a W3bstream - Kolektivo collaboration. 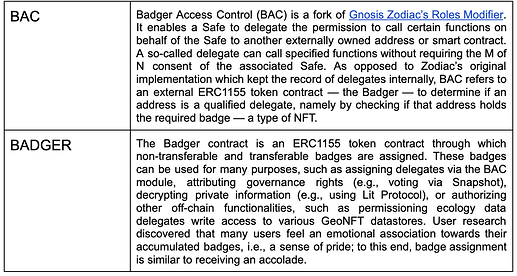 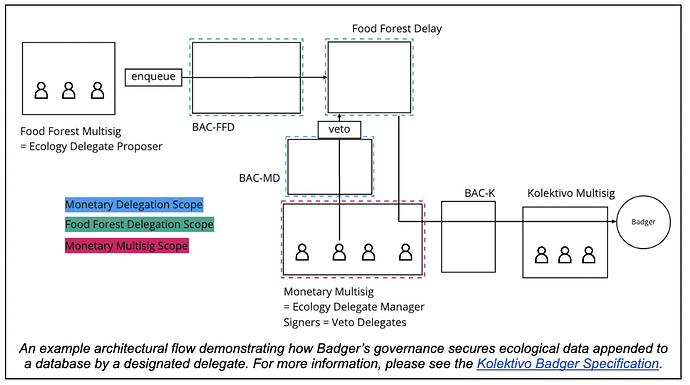 As part of the Kolektivo Framework’s tools, our team created the GeoNFT: a non-fungible token standard that brings location data for an NFT on-chain. In the Kolektivo Framework, GeoNFTs typically represent ecological assets — e.g. regenerative agricultural projects — or data-producing devices — e.g. weather stations. However in the future, GeoNFTs are planned to include merchants and other place-based operators which could also well be IoT devices.

The GeoNFT is implemented as an extended version of a non-fungible token (ERC-721) that includes geospatial location and, in the Kolektivo Framework’s future case, an ecological index — a type of calculated indicator or score that provides a quick assessment of a territory. GeoNFTs can generally be seen as the digital twin of a real-world asset, such as an area of land, carrying relevant data about what is going on the ground in relation to that asset. In the future, we aim to fractionalize — i.e. divide into ERC20 tokens — GeoNFTs to allow them to fulfill innovative functions, such as backing local Reserves that issue Kolektivo’s community currency.

Our goal is first to prove the relevance of a collaboration between W3bstream and Kolektivo by conducting a Proof-of-Concept (PoC). By installing some Pebble Trackers in some of Kolektivo’s food-forests in Curaçao and by leveraging W3bstream’s technologies to convert this real-world data into verifiable, dAPP-ready proofs, we aim to demonstrate the usefulness of W3bstream in the context of the Kolektivo Framework. We envision this simple, small-scale experimentation as a springboard for a longer-term partnership iteration — integrating some of the Kolektivo tools into W3bstream:

Similar to W3bstream, Kolektivo recognizes the critical importance of data as a new fundamental asset class. Since its first experiments in 2018, Kolektivo’s main ambition has been to use the power of Web3 tools to enable local communities to build antifragile institutions, capable of facing the challenges of the 21st century. By leveraging the power of ecological data, Kolektivo aims to unlock new funding capabilities for those communities to protect and regenerate their local ecosystems. We believe that W3bstream can help us achieve this goal by scaling up environmental data collection, verification, and storage, creating a global baseline of trusted environmental monitoring data. Downstream, this data could ultimately be used for new funding vehicles for small farmers such as environmental credits or environmental data marketplaces.

Starting by conducting a simple Proof-of-Concept will allow Kolektivo Curaçao to benefit from W3bstream’s technological expertise to bring the data flow of its Framework to the next step — ultimately confirming the meaningfulness of a collaboration.

The following benefits to W3bstream and Kolektivo will then be enabled by integration of the GeoNFT and Badger framework modules:

A group of food forest stewards joins Kolektivo. To capture and report ecological data such as humidity and temperature, they acquire five Pebble trackers, place them within their food forest, and set up a w3bstream node. They mint GeoNFTs representing these Pebble trackers, with their unique decentralized identifiers (DIDs) keeping track of various kinds of data collected by these devices. Over time more people want to get involved by starting and managing food forests. Because the Pebble trackers don’t need to be located within one food forest all the time, but only every week, our group starts to help out the new food forest enthusiasts by borrowing their Pebble trackers, which are then relocated between food forests every other day. To collectively own the devices they use, and govern the processes of data collection, verification and monetization, the food forest community uses a Safe, binding the devices to a node governed by a community multisig.
Because the group has become rather large by now and many don’t know much about that measurement side of the food forests, the group wants to delegate certain capabilities to the tech nerds among the group. They pass a “Device Onboarder” badge to a person that can bind new devices to the Safe (without requiring the consent of the others). Another person that is frequently relocating devices between food forests to meet the measurement requirements of Kolektivo receives a “Relocator Badge” which allows them to to take out a certain monthly sum from the Safe to compensate them for the expenses they occur for relocating the devices. Over time the interest in the food forest data grows and parties are willing to pay for access. Revenue accrues to the Safe. The community decides how they want to split these revenues: half of it goes to the groups that maintain the food forest and the other half goes pooling more resources for buying more Pebble trackers and other useful IoT devices. The group represents these revenue claims once again with badges.

An environmental association working for the preservation of bats owns a few ultrasonic detectors installed in specific protected areas, gathering crucial data to map out bat populations. This bats’ association joins W3bstream and mints a GeoNFT governed by a multisig to represent their ultrasonic detectors. By registering their GeoNFTs on the Biodiversity Impact Map, the association receives a “Biodiversity Badge” which guarantees them access to the metadata of all other GeoNFTs displayed on the map, as well as to the governance of it — e.g. participating in the decision process that registers new Biodiversity related GeoNFTs on the Map. The bats’ association can thus easily get in touch with other organizations working in fields similar to its own, in order to exchange or even merge their verified ecological data to build ecological models — maybe even forming ecological data unions governed by DAOs to fund their research through data packages’ monetization. A small group of “Biodiversity Badge” owners would be able to coordinate to set up their own W3bstream node to receive additional rewards. Each of the organizations operating the node would receive a “Node Operator Badge” allowing them to be increasingly involved in the W3bstream community by participating in the governance of predefined aspects of the W3bstream Network. 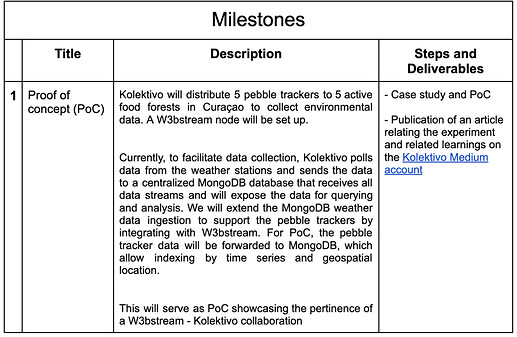 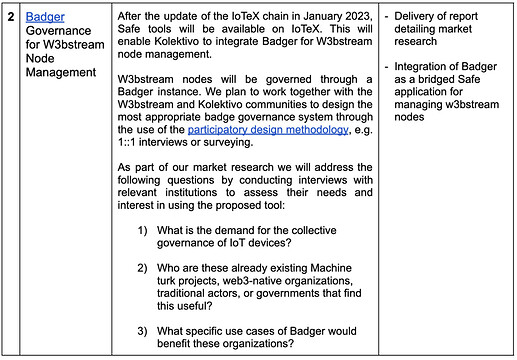 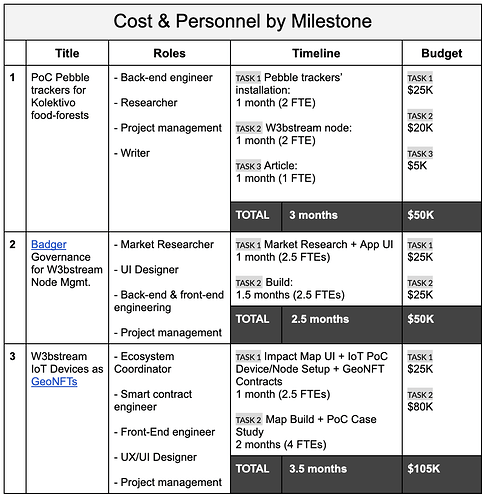 The Kolektivo Framework is the product of collaboration amongst various Web3-native builder groups, all experts of their fields. The implementation of the proposal detailed above will be guided by the following two teams:

Curve Labs is a software engineering company specializing in mechanism design and smart contract development. The team is made up of designers, economists, software engineers and researchers aspiring to develop frameworks and tooling for a decentralized socio-economic paradigm — i.e. areas that include ReFi, DeSci and the arts. Curve Labs owns an extensive experience in protocol design, smart contract architecture and development, dApp design and development.

Astral builds location-based Web3 applications and spatial smart contracts to serve applications that interact with the real-world, such as MRV tools (measurement, reporting, and verification), spatial governance systems, sustainability-linked bonds, parametric insurance mechanisms, or location-based Web3 games. As one of the core builder teams of Kolektivo, Astral is working on key technologies such as the GeoNFT, the Spatial Data Registry, the Ecological State Data Management System, and the Impact Map.

As someone who has spent ~ 10 years as a volunteer for a water quality testing program in the waters around New York City, I’m thrilled to see this initiative. “If you don’t measure it, you can’t change it.”
And being part of the IoTeX team, I understand the next step is monetizing that data. I’m rooting for you. - Marcos