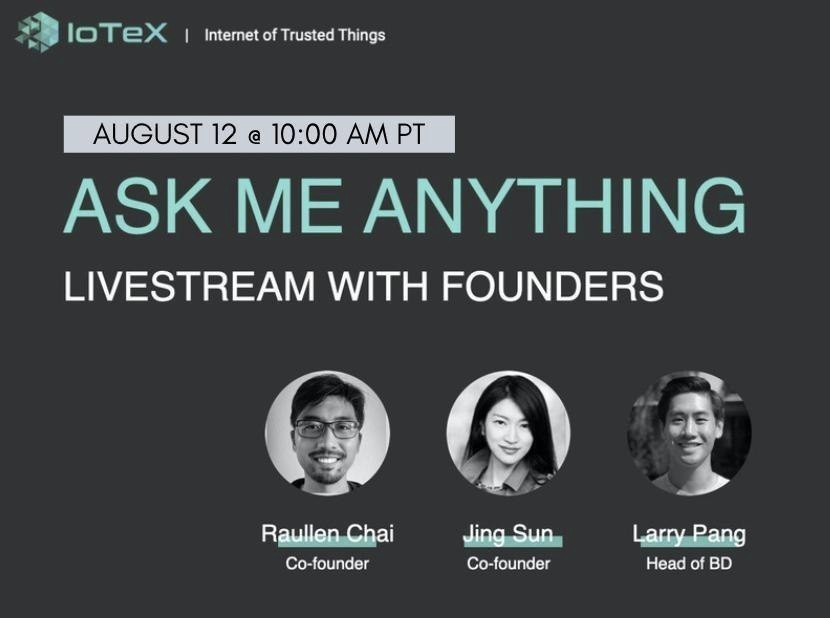 What started as a platform/concept is now turning into a very much an ecosystem, which we’re very excited about! Now we are not only launching projects internally, such as Ucam and Pebble Tracker but are also starting to piece together other projects, such as, onboarding the 1st batch of Halo grants, making amazing progress with the new tokenomics design to string together users, builders, and service providers. We feel that everything is coming together from a design and high-level perspective but it’s just gonna be a matter of time before it all becomes very apparent to everyone, especially the IoTeX community.

There’s been so much news coming out from IoTeX lately, almost every few days there’s a big announcement. Just a couple of weeks ago we just kicked off Burn-Drop Ignite and very shortly we’ll launch Ucam on Amazon!

Burn-Drop is set to launch in 2 phases:

Our core team is working very closely with the Tenvis team and we are very happy to announce that the mass production is already in progress and by the end of next week we will complete the first batch of orders and then start shipping to Amazon’s Distribution Centers. Right now because of the pandemic it does take a little longer to get into their centers hence the reason for the delay. In the meantime, we would like to ask our community to please be patient and enjoy the Burn-Drop Ignite, that’s offering ~ 20% annualized returns in August, which is a great opportunity for everyone!

Within IIC we published a really big white paper called Distributed Ledgers In Industrial IoT. This is a year-long process and we worked alongside a lot of big companies, such as Amazon, Huawei, Price Waterhouse Coopers, and others. This WP is a testament to the fact that we’re not just internalizing IoTeX technology, we’re also sharing our view of blockchain and IoT with the largest enterprises in the world by co-authoring papers alongside them.

Some months have passed since the launch of Mainnet GA, which was launched on June 1st. Are you satisfied with the interest of the community, delegates, developers, and traders? How was it different from your expectations and what are you most proud of?

In terms of the chain, it works great and as expected. It’s super fast also cheap enough to power lots of Dapps, especially DeFi apps. In terms of Delegates, we have onboarded maybe 5 or 6 more delegates onto the network and there are a lot of people who want to become our Delegates. We are also doing very well on the developer side, we have launched the Halo Program together with the Mainnet GA and received ~20 applications up-to-date, out of which we accepted 6 so far. All of these pre-approved projects are in different sectors, including healthcare, gaming, DeFi, and IoT.

After the launch of Mainnet GA, we have been also cutting new releases, for example, Mainnet version 1.1 was just launched this weekend and it will have some new features that our community will love!
This shows our philosophy and the plan to continuously upgrade the platform going forward. I would say that the biggest difference within these two months, has been the shift from building mode, on which we have been focusing for the past 2.5 years to now building an ecosystem and all those building blocks on top of the blockchain platform to help the developers, enterprises, and our partners to build on top of.

How can you, as an enterprise, show the security of your device to someone who doesn’t know about blockchain, in order to make them trust in Ucam more than in any other camera on the market?

This is a new space and it shows that we need a lot of education, coming not only from us but also from a lot of thought leaders in the industry and of course from our beloved community members to share their experience. For Ucam version 1.0 the offer to the community is very clear - we leverage the blockchain technology to ensure end-to-end encryption and for the first time ever, we can provide our users with the full ownership of their device and all of their data. This is already in itself a big deal when comparing to all the other cameras on the market that can’t offer this. Also, we are already preparing for Ucam v.2.0 which will have even more amazing features, including decentralized storage and confidential computing!

We’ve always said that the 3 core pillars of the IoTeX platform - blockchain, decentralized identity, and confidential computing. Confidential computing has been a little abstract in a way and it’s pretty hard to explain the fact that you can process things in this secure part of a device but that’s definitely coming, hence that’s why we joined the Confidential Computing Consortium to add this capability to our future products. We have devices where we allow people to own their data but confidential computing will allow people to use their data in a very privacy-preserving fashion. This may sound like a small jump but it really is a massive game-changer for the entire I would say society as we know it.

What role does IoTeX want to play in the DeFi space?

We want to be the enabler of these DeFi applications and provide basic blocks for anybody who wants to build a DeFi app on top of IoTeX. We already have IoPay {mobile and desktop} and are looking to integrate it with a DeFi app. Also, we have IoTube, which we have been using in production for a while now for transferring IOTX ERC20 to IOTX native. In the future, we are looking forward to opening it up to more assets and using it as a bridge between different networks. Finally, we are working on an edge oracle, to provide our community with more trusted data.

Now that there will be a cross-chain DEX on IoTeX, will the team be running a liquidity pool staking campaign to encourage long-term staking awards and encourage using the platform as the first choice to buy and sell IoTeX related coins?

This cross-chain DEX basically comes with two parts: the cross-chain part is facilitated by us and DEX part is actually facilitated by one of our Delegates, Capital Mu, who are the fintech gurus. We are working closely with their team to transfer all the assets from Ethereum to IoTeX. This will open up immediate use cases for the infrastructure apart from seamlessly transferring assets from Etherum to IoTeX.

You can be compared with Apple in the world of blockchain, you build a blockchain and release a product (Ucam) a private camera. Why did you choose such a business model? Is selling a Ucam camera a separate business?

You mentioned Apple but actually we are more like the Android model. Apple undoubtedly has great quality but also a pretty high margin, whereas, we are striving to bring a lot of facilitators and innovators to create a very low entry barrier to get into the IoT space and create a diversity of the products. By having different types of manufacturers and innovators get on board with so many devices connected it will benefit the network hugely!

What kind of milestones are most important and what’s the target for IoTeX in 2020?

Actually we have 4 big initiatives for IoTeX in the next year so. The first one is the building blocks for DeFi like a DeFioT that’s already ongoing. Second is privacy for smart homes powered by products like Ucam and following with others that we are currently developing with our partners. The third one, we didn’t talk much about is the edge oracle, which is a very cool idea that is very different from the ChainLink style oracle. This one will come out in Q4 this year and probably we will see adoption and applications coming in next year, Q1 or so. Finally, the fourth one is of course the blockchain, we will keep improving the blockchain to make it support these initiatives above. IoTeX team has a pretty clear and impactful roadmap for the near future and the goal, of course, is to drive IoTeX to become a leading platform for like IoT and blockchain sector in 2020/2021.